How to Make Weed Infused Vodka 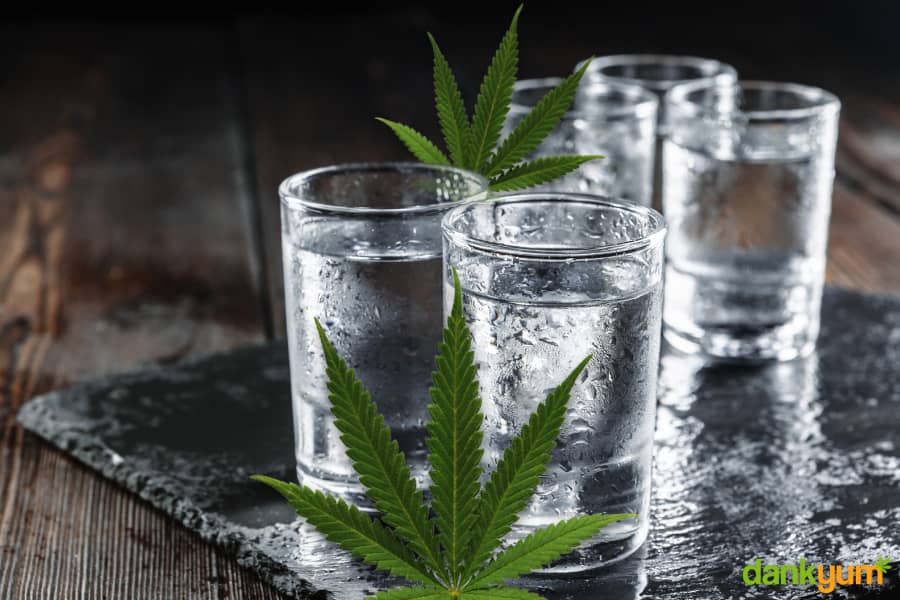 Vodka is a great alcohol to infuse with weed due to its high alcohol content. The high alcohol content helps draw out and extract those lovely cannabinoids and terpenes from your weed, into your vodka. Weed vodka is very easy to make and it’s a great novelty drink to have on special occasions or used in cocktails.

If you want to go straight to how to make weed vodka, click the “jump to recipe” button above or scroll down.

What can I do with weed infused vodka?

Weed vodka can be drank straight as it is, used in cannabis infused cocktails, or even in boozy deserts. Here are some recipes that you can use it in:

Can I add flavour to the cannabis vodka?

Yes! You can add spices like cinnamon, or fruits to flavour your vodka. Sweet citrus fruits go very nicely infused into vodka.

Try infusing these fruits into your vodka for a refreshing blast of flavour:

How much weed should I use?

We recommend using about 7 grams of cannabis per 500ML of vodka however you can add more or less depending on your desired potency. Using more cannabis will result in a more potent and flavourful cannabis vodka.

Should I decarboxylate my weed before infusing?

You need to decarboxylate your cannabis before infusing it into the vodka if you want it to have the psychoactive effects you expect from THC. If you just want the flavour and aroma profile from the weed, you do not need to decarb.

Decarboxylation is the process of activating the THC & CBD in your cannabis using heat. Check out our easy to follow guide on how to decarb weed at home using an oven.

A quick and easy guide on how to make weed infused vodka. Can be drank on it's own, or used in cocktails. This recipe contains multiple infusion methods – a quick 2-3 hour infusion for those in a rush, or a slow infusion that you can let sit for a week or two depending on your preference.
5 from 11 votes
Print Recipe Pin Recipe
Prep Time 35 mins
Cook Time 3 hrs
Total Time 3 hrs 35 mins
Course Cannabis Infused Alcohol
Cuisine Cannabis Cuisine
Servings 1 Bottle
Calories 25 kcal

*You can use fresh non-decarboxylated cannabis to give your vodka a nice scent, colour, and flavour profile however it will not have the psychoactive effects you would get when using dry decarboxylated cannabis. *If you do not have a bottle to use, glass mason jars also work perfectly as an alternative. Glass jars may also be better for infusing smaller amounts. *You can also use AVB (already vaped bud) in this recipe, and because it is already decarb’d from the vaping process – you do not need to decarb it again. *To avoid having to strain out the weed after infusing, you can make a “teabag” style package instead and drop that into your vodka. Remove the weed “teabag” after infusing. *An optional step for those who did a slow no-heat infusion:

Calories: 25kcal
Keyword Cannabis Infused Vodka, Weed Vodka
Tried this recipe?Let us know how it was!

What should weed vodka look like when it’s finished infusing?

Depending on how long you infused your cannabis vodka for, it probably isn’t a clear liquid anymore like when you started. The colour of your end product depends on how long you infused for, the quantity and type of cannabis used, if you decarboxylated your weed, and even the strain of weed you used. The colour of your vodka does not indicate how strong it is so always start with a low dose when testing out the potency.

Your cannabis vodka can come out slightly yellowish, golden, greenish, brownish. For a clearer colour, do not grind your cannabis too fine before infusing, and double filter out the cannabis material at the end.

Don't worry, we won't spam you!